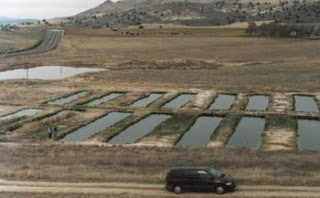 I was recently researching Aquaculture projects in Oregon and I stumbled across this gem here in Southern Oregon (not far from the California border) that I feel my readers would be interested in. This aquaculture farm is used to raise 85 varieties of Cichlids from Lake Malawi in Africa’s Great Rift Valley as well as some from Central America.
“Gone Fishing” sells 250,000 of the fish annually to tropical fish wholesalers from Portland, OR to San Francisco, CA; shipped weekly by truck to Sacramento, and then by air to the various other outlets. 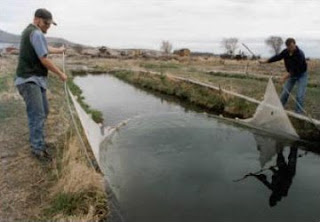 The “Gone Fishing” aquaculture project is located about 10 miles south of Klamath Falls, Oregon, near Merrill in the Lower Klamath Valley adjacent to the Klamath Hills.
The original ponds at this facility were constructed in 1984 and have seen limited use. Ron Barnes started the current facility in 1990 using the effluent from a geothermal greenhouse operation on the Liskey Ranch located on Lower Klamath Lake Road.

Geology/Logistics:
The geology of this part of Southern Oregon in Klamath County consists of large normal fault blocks, typical of the Basin and Range province. The Klamath Hills are typical of these fault blocks, allowing geothermal waters that circulate at depth, and move to the surface in shallow aquifers that are easily tapped for the Gone Fishing Aquaculture Farm.

At the original location, a greenhouse complex consisting of four 6,000 square-foot buildings are heated using a peak of 400 gpm from six geothermal wells ranging in temperature from 80F to 200F and all are around 100 feet deep.
The newer set of ponds are provide geothermal water from a 460-foot deep well that pumps up to 300 gpm of 210F water. The water surface in the newer well is at 120 feet and the line shaft pump bowls are set at 190 feet.

The water from the wells is alkaline with a pH of 8.8 out of the wells, but the chemical composition of the pond liners (diatomaceous earth) and soil surrounding the ponds reduce the pH to about 7.5 as the water flows through the system. The water is primarily a sodium-sulfate type of about 600 ppm that can be used directly in the ponds without harm to the fish. This is about the same chemical composition as the water of Lake Malawi. 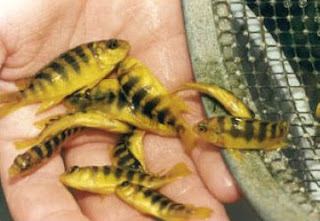 The average annual sunshine in this part of Oregon is also quite high (as even winter cloud cover is not as continuous as western parts of Oregon due to the blocking affects of the Cascade Mountains). This also allows for some duplication of Africa’s Rift Lake areas high amount of sunshine, although the lower winter sun here at this latitude does substantially lower beneficial light energy such as UVA as well as PAR light wave lengths (UVB is not considered necessary for fish, while UVC although useful for UV Sterilization as found in UVC Bulbs does not even reach the Earths surface even in tropical latitudes). This may slow the growth of plant material grown in the ponds for these generally omnivorous fish.

A Little History
In 1998, Ron Barnes purchased 80 acres of land just north of the greenhouses on the opposite side of the road. The operation has grown to 37 ponds located on the Liskey Ranch and 35 at the new “Gone Fishing” location.
Future plans (that may already have been accomplished) are to raise food grade Tilapia here as well.